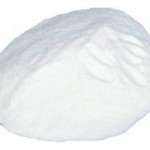 Aluminium oxide is a chemical compound of aluminium and oxygen with the chemical formula Al2O3. It is the most commonly occurring of several aluminium oxides, and specifically identified as aluminium(III) oxide. It is commonly called alumina, and may also be called aloxide, aloxite, or alundum depending on particular forms or applications. It commonly occurs in its crystalline polymorphic phase α-Al2O3, in which it comprises the mineral corundum, varieties of which form the precious gemstones ruby and sapphire. Al2O3 is significant in its use to produce aluminium metal, as an abrasive owing to its hardness, and as a refractory material owing to its high melting point.[5]

Al2O3 is an electrical insulator but has a relatively high thermal conductivity (30 Wm−1K−1[3]) for a ceramic material. Aluminium oxide is insoluble in water. In its most commonly occurring crystalline form, called corundum or α-aluminium oxide, its hardness makes it suitable for use as an abrasive and as a component in cutting tools.[5]

Aluminium oxide is responsible for the resistance of metallic aluminium to weathering. Metallic aluminium is very reactive with atmospheric oxygen, and a thin passivation layer of aluminium oxide (4 nm thickness) forms on any exposed aluminium surface.[6] This layer protects the metal from further oxidation. The thickness and properties of this oxide layer can be enhanced using a process called anodising. A number of alloys, such as aluminium bronzes, exploit this property by including a proportion of aluminium in the alloy to enhance corrosion resistance. The aluminium oxide generated by anodising is typically amorphous, but discharge assisted oxidation processes such as plasma electrolytic oxidation result in a significant proportion of crystalline aluminium oxide in the coating, enhancing its hardness.

Aluminium oxide was taken off the United States Environmental Protection Agency‘s chemicals lists in 1988. Aluminium oxide is on EPA’s Toxics Release Inventory list if it is a fibrous form.[7]

The most common form of crystalline aluminium oxide is known as corundum, which is the thermodynamically stable form.[8] The oxygen ions nearly form a hexagonal close-packed structure with aluminium ions filling two-thirds of the octahedral interstices. Each Al3+ center is octahedral. In terms of its crystallography, corundum adopts a trigonal Bravais lattice with a space group of R-3c (number 167 in the International Tables). The primitive cell contains two formula units of aluminium oxide.

Aluminium oxide also exists in other phases, including the cubic γ and η phases, the monoclinic θ phase, the hexagonal χ phase, the orthorhombic κ phase and the δ phase that can be tetragonal or orthorhombic.[8][9] Each has a unique crystal structure and properties. Cubic γ-Al2O3 has important technical applications. The so-called β-Al2O3 proved to be NaAl11O17.[10]

Molten aluminium oxide near the melting temperature is roughly 2/3 tetrahedral (i.e. 2/3 of the Al are surrounded by 4 oxygen neighbors), and 1/3 5-coordinated, very little (<5%) octahedral Al-O is present.[11] Around 80% of the oxygen atoms are shared among three or more Al-O polyhedra, and the majority of inter-polyhedral connections are corner-sharing, with the remaining 10–20% being edge-sharing.[11] The breakdown of octahedra upon melting is accompanied by a relatively large volume increase (~20%), the density of the liquid close to its melting point is 2.93 g/cm3.[12]